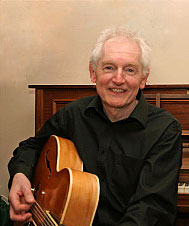 Alan playing one of the guitars he acquired from Amancio, a Gibson L7 which was made in 1937. The date inside was 7/7/37 and signed “EP”. It was built as an acoustic.

I was listening to the second movement of Beethoven’s 7th Symphony recently – I play the oboe part sometimes – and I was reminded of Amancio, as he said it was one of his favourite pieces of music. Not perhaps the most usual choice for a jazz guitarist!

Memory took me back to my first meeting with this brilliant musician. I was playing guitar and gigging regularly, but felt I needed to find something more in my playing. Somehow I had got hold of Amancio’s phone number and with some trepidation I phoned him up. “Can you help me with my guitar playing?” I asked. “Come on over” was the instant reply.

So over I went to Amancio’s house in west London. The door was opened by his wife Joyce, the three children were playing around on the sitting room floor and a smell of curry wafted in from the kitchen. Amancio was sitting there, cross-legged, playing guitar. He didn’t stop – just signalled to me to get my guitar out and start playing. Wow! I was terrified. But I began playing.

One hour passed – then two. We just played on. Then the delicious curry came out and we all had lunch together. I had had worries about my ability to pay Amancio’s tuition fees. I needn’t have worried. Money was never mentioned.

Over the next few years this pattern was repeated many times and I’ve no doubt that my guitar playing – and my confidence – improved enormously as a result. Amancio and I ended up as friends and I keep in touch with Joyce. Surprisingly, the oboe is now my main instrument and I play in several local orchestras, but I still get the guitar out and then my thoughts invariably wander to that incredible initiation so many years ago!