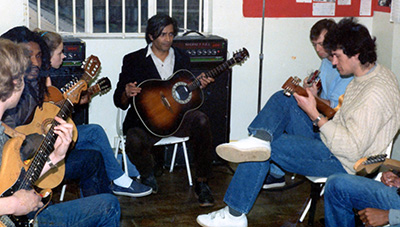 Bruce Pollin (on the right), attending one of Amancio’s guitar classes at Jenako Arts Centre London around 1990.

I have been a sculptor and maker and sometime guitar maker, for most of my working life, with a keen interest in improvised and Jazz guitar. I first met Amancio in the late sixties, while I working as a guitar salesman. Along with many musicians, he liked to hang out in Selmers which was a major retailer of musical instruments, at the time, in Charing Cross Road in London. This was where I first heard him play guitar and I was immediately impressed with his speed and facility and most of all with his sense of time and rhythm. He was just a natural with those Latin rhythms! I knew that he had recorded with some Jazz luminaries before I met him. He had made several albums, a notable one of which was Hum Dono, with Joe Harriot. We got talking and one day he invited me to his home in London where I met his wife, Joyce and his children Maria, Stephano and Francesca. The children were very young and utterly charming!

We then would meet occasionally at Selmers and go for a coffee in Bunjies which was quite close. I accompanied Amancio to a club one evening where he played some solo Latin pieces. Wonderful to watch him work. When the family moved to Essex we saw rather less of each other until we met at Brockwood Park, quite by chance. I had no idea Amancio and his whole family had an interest in the teachings of J Krishnamurti. For some years we would meet, with our tents, at the annual Krishnamurti talks at Brockwood Park!

I still recall the hospitality and the many vegetable curries and conversations with Amancio and Joyce. I also remember comping for Amancio while he played modal pieces. He overlooked my musical shortcomings so it was fun and I learned a lot. Those meetings were a sort of welcome constant for me during some difficult times.

We would also meet at the family’s homes in Essex and later in Hampshire. The guitar challenges continued unabated! Stephano was also playing well. Amancio used to give a group lesson at the Jenako Centre in Balls Pond Road very close to where I had a studio so he would come round for a chat afterwards, and play some guitar. I was totally absorbed in running a studio at this point, and had a young family so we then rather lost touch.

I often think of those times, and hope Amancio knew of my affection for him, and the whole family. It was good to see Stephano doing a set of Amancio’s music at Ronnie Scott’s a while ago with Norma Winstone and others.